Testing your dermatological treatments in human skin can accelerate lead optimization. But how are models using human tissue established? In this infographic, we demonstrate how scientists at REPROCELL helped one Pharma company accelerate the optimization of their lead Psoriasis compound. By using human fresh skin, researchers were able to determine the optimal concentration of the treatment and confirm whether it reduced inflammation. Read on to discover the aims and methodology behind this study, or download the full infographic for later.

Before investigating the therapeutic effect of their articles on the target population, our client wanted to determine potency. To determine the therapeutic dose, we decided to test the lead, backup, and reference compound at four different concentrations. This experimental design would require relatively high throughput, so we opted for our induced psoriasis model, rather than diseased biopsies, for this first phase. Compound efficacy was measured by the reduction in cytokine gene expression and release from the tissues.

Our scientists procured healthy, fresh skin tissue from our clinical networks, then created 3mm punch biopsies from this living sample. These punch biopsies were then incubated in culture media with a chemical cocktail designed to induce a psoriasis phenotype. Following 24 hours of incubation, the lead, reference, and backup compounds were tested in the skin biopsies at four different concentrations. The culture media was then removed, and the level of inflammatory cytokines in the supernatant was determined using ELISA. Gene expression data was also gained using PCR, and the optimum concentration of the lead compound was determined from these results. 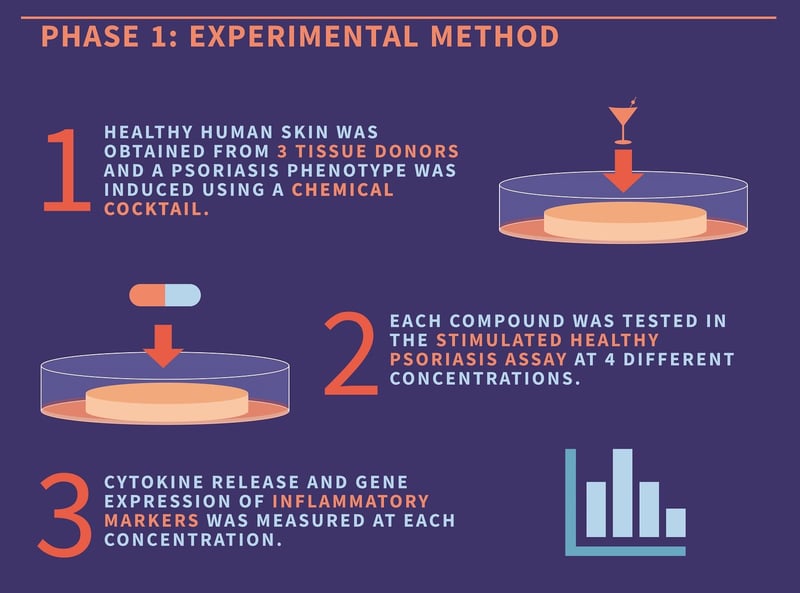 Now that we knew the optimal concentration of the lead compound, we could concentrate on exploring whether the compound had the desired effect on the patient population. To achieve this, we tested the lead compound ex vivo on diseased skin biopsies from patients with psoriasis - as before, cytokine release and gene expression were used to determine drug efficacy.

From our clinical network, our researchers procured skin biopsies from three donors with psoriasis. One normal skin biopsy and two plaque biopsies were procured per donor. Each biopsy was cultured at the air-liquid interface in culture media and exposed to the lead compound at the optimal concentration determined previously. Following incubation, the supernatant and skin biopsies were collected and used to determine compound efficacy. All of the data prepared in the study was collated and provided to the client as a report. 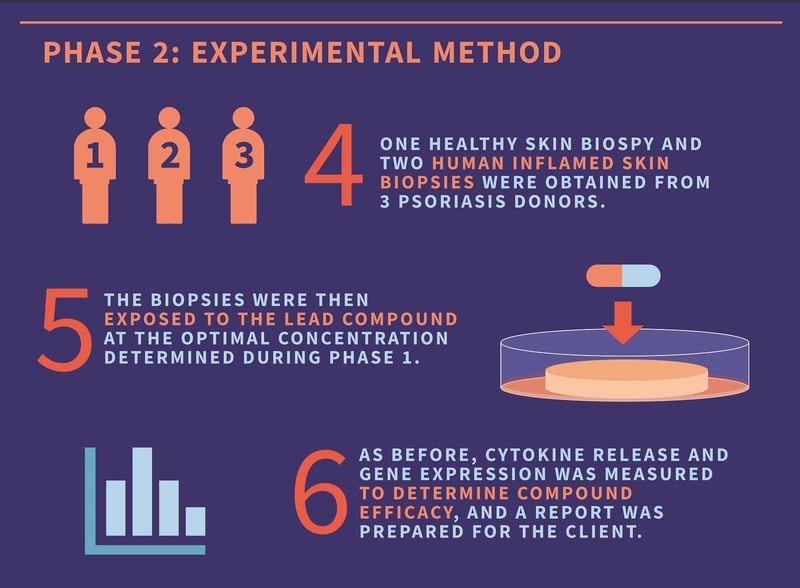 Summarising the aims of this study

In this infographic, we summarize the aims, methods, and findings of a study using human fresh tissue. Through the initial pilot study, scientists at REPROCELL were able to estimate the optimal concentration of the compound for use in Phase 2; which included healthy and diseased skin biopsies from Psoriasis donors. You can find out more about our ex vivo psoriasis models here.

Editors note: This blog was first published in September 2020 and has since been updated for accuracy and clarity.