Three-dimensional (3D) in vitro culture can improve the performance and physiological relevance of immortalized and primary cells. However, it increases proliferation rates in some cell types (e.g. mesenchymal stem cells, osteosarcoma cells, HUVECs) which puts extra demands on nutrient supply and waste removal [1,2,3]. This can be addressed by the use of a perfusion system that circulates a large quantity of media over or around the 3D culture. The systems have been shown to improve cell proliferation and specific protein expression beyond that seen for static 3D cultures [4,5,6,7].

In this post, we will explore two examples of how perfusion systems can help improve the relevance of your 3D cell culture, based on two publications from Alvetex users in the field of developmental biology and cancer.

In a 2017 Bone Reports study8, researchers from the University of Melbourne and from Boston University teamed up to investigate the crosstalk between bone and muscle; more specifically, the effect of osteocyte-conditioned medium on myogenic differentiation. MLO-Y4 osteocytes were cultured in Alvetex scaffold in either perfused or static conditions (using a perfusion plate or well inserts respectively) and the resulting conditioned medium was added to C2C12 myoblasts. 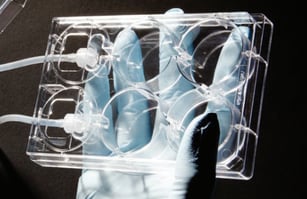 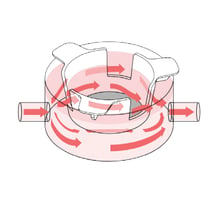 In a separate project, scientists from the University of Oxford cultured the human pancreatic cancer cell line PSN-1 over a period of seven days, in either static or perfused conditions, using the Alvetex perfusion plate. The levels of glucose and secreted lactate contained in the cell culture medium were monitored as indicators of metabolic depletion, while protein syntheses and cell proliferation were measured by expression of phosphorylated Ribosomal protein S6 and cyclin D1. Results suggested that perfusion culture reduces hypoglycemia, anaerobic stress, and preserves protein synthesis and cell proliferation.

Figure 2: A, Unidirectional flow through 4 interconnected wells within each Alvetex Perfusion plate. B, Each well can support 2D or 3D culture, for a range of co-culture options.

Adding Perfusion to your 3D Cell Culture the Easy Way

If this is the kind of results you want to achieve with your in vitro cell models, then adding perfusion can be done with minimal disruption to your existing protocols. Alvetex Perfusion plates:

Could perfusion reduce metabolic stress in your cultures and improve the functionality of your cells? Get in touch with one of our scientists to find out. We’re looking forward to learning more about your work and how our systems could help you take your research further.

Editors note: This blog was first published in 2019 but has since been updated for accuracy and clarity.