Barrier assays are an important tool for in vitro drug development and drug safety testing. For example, they can be used to assess the absorption of a drug candidate through the intestinal wall1 or the corrosion of chemical compounds on skin2. In this article we discuss how Alvetex can be used to increase the physiological relevance of your in vitro barrier assays.

What are epithelial barrier assays?

Barrier assays have a long history and a whole range has been developed3 to respond to the needs of small academic labs all the way to large pharmaceutical toxicity departments. But where small-scale studies can use in vivo animal studies or ex vivo human tissue for the greatest degree of physiological relevance, large-scale studies have to rely on assays of much lesser complexity, such as Caco2 monolayers or PAMPA5 for intestinal permeability, to streamline workflows, keep costs down or comply with regulations to decrease animal testing6. 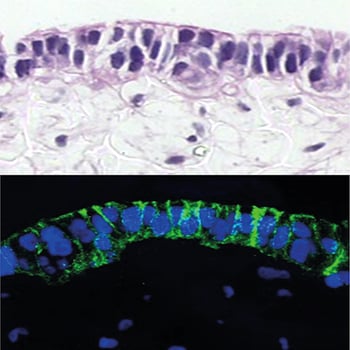 What are Bio-Engineered Tissue Models?

Enter bio-engineered 3D tissues models7. 3D cell culture scaffolds restore the Z-dimension which is missing in flat-surface cell culture and allows for the building of mucosal and sub-mucosal compartments in a single model. As a result, the epithelial layer can benefit from paracellular signalling from fibroblasts grown in 3D, with endogenously-deposited ECM. The epithelial cells mature better and their morphology and functionality end up being much closer to in vivo compared to conventional culture on flat surfaces.

At REPROCELL, our Alvetex 3D polyHIPE substrate has been proven to help in the building of such physiologically-relevant barrier assays using primary human cells for a number of applications:

Alvetex is a great substrate for building barrier assays:

In addition, Alvetex has been used for more unconventional applications of barrier assays, such as the activation of immune cells after their migration through an epithelium11. Actual migration through an epithelium was required, so traditional paracrine co-culture models would have been inadequate, but using the barrier assay improved the functionality of the cells-of-interest prior to the main test of their efficacy. It is a clever solution to the problem of getting more physiologically-relevant cells without having to alter the set-up of an already-established assay system.

Increasing the complexity of established assays is always a challenge, but the rewards gained from greater physiological relevance are worth the effort, both in terms of better disease understanding and to avoid costly drug failures at late pipeline stages.

Discover the science: how Alvetex enables cells maintain their in vivo morphology, behaviour and responsiveness within an in vitro model system. Alvetex enables cells to  freely interact with their neighbours in 3D cell culture — so that they function in a more physiologically relevant manner. Download your Alvetex Brochure today.

Editors note: This blog was first published in July 2019 and has since been updated for accuracy and clarity.