Wheat Germ Agglutinin (WGA) is a well-known lectin originally noted for its differential ability to agglutinate cancerous versus normal cells[1] and later identified as a plasma membrane staining agent of both animal[2] and bacterial[3] cells, thanks to its binding of N-acetyl-D-glucosamine and N-acetylneuraminic acid residues[4] on plasma membrane glycoproteins. WGA is now commonly used to visualise cell boundaries and as a double-stain to ascertain membrane proteins localisation.

This document contains is an example protocol for the WGA staining of cryosections of cultures of the hepatocarcinoma cell line HepG2[5] in both Alvetex Scaffold and Alvetex Strata. It is recommended that for any dye used, the original manufacturers’ instructions for fixing, blocking and incubating methods be followed. Imaging of the specimens will also need to be optimised according to the specifications of the microscope used.

3. Preparation of samples for fixation, embedding and cryosectioning

4. Preparation of samples for WGA staining

Note: As WGA specifically targets the plasma membrane compartment, care must be taken not to permeabilise the samples before staining. When double-staining with a dye or antibody for which permeabilisation is necessary, perform WGA staining first and then permeabilise the sample, using a low concentration of detergent and a short exposure time whenever possible. 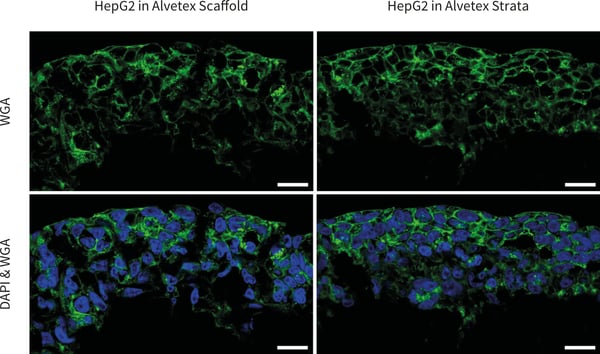