REPROCELL will be taking part in Biotechgate Digital Partnering between the 29 November until 3 December. Click here to book a meeting with our experts.
Protocol:

The LN-229 cell line was established in 1979 from cells taken from a patient with right frontal parieto-occipital glioblastoma.[1] The cell line is mainly used in studies of apoptosis. Stimulation of the cells with Fas ligand leads to apoptotic cell death within 16 hours. The cells are also killed by puromycin in a dose dependent manner.[2]

LN-229 cells were maintained on Alvetex Scaffold 96-well plates (AVP009) for up to 10 days. Cultures underwent complete media change every 2 days. At specific time points, cultures were harvested and analysed by histological staining at 3 days (Figure 2) and MTT viability assay at 1, 3, 7 and 10 days (Figure 3), to monitor cell survival and proliferation within the scaffold. For histology protocols refer to Alvetex Protocols.

The results show good evidence of growth of LN-229 cells in the Alvetex Scaffold 96 well plate format. The cell population grows in a typical fashion and reaches a plateau after 7-10 days. The data also demonstrate the compatibility of Alvetex Scaffold with a standard viability assay. 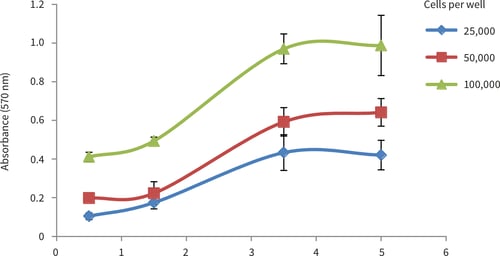 Figure 3. LN-229 growth curves obtained from MTT viability analysis for up to 10 days at three different cell seeding densities. Good linear growth was observed between 3 and 7 days, with a plateau in cell growth occurring after 7 days for all seeding densities (n = 6, mean ± SD).