REPROCELL will be taking part in Biotechgate Digital Partnering between the 29 November until 3 December. Click here to book a meeting with our experts.
Protocol:

REPROCELL’s Alvetex Scaffold 384 well plate is comprised of a black plate, clear plastic base, with Alvetex Scaffold at the bottom of each well. The Alvetex Scaffold has been heat welded to the base of the wells in a process which does not alter its physical structure. Cells growing in 3D are exposed to culture medium from above only and predominantly reside in the top portion of scaffold. As with 2D culture, the use of coating reagents to enhance cell growth can be considered (e.g. ECM proteins, poly-d-lysine).

Alvetex Scaffold 384 well plate technology is reproducible and compatible with a variety of in vitro cell viability assays and offers the advantage of assay multiplexing, which may not be possible when using alternative cancer cell biology models, such as soft agar clonogenic assays.

Note: The PBS and media washes must be carried out immediately after aspiration of the ethanol solution to avoid the scaffold drying out.

For the best results it is recommended to optimise cell seeding density in the first instance. We have previously demonstrated that between 1,000 and 10,000 cells can be seeded per well in the final culture volume (e.g. 75-100 µL per well). This will depend on the nature of the cell type and its appropriate growth conditions. Typically seeding cells in the range of 3,000 to 5,000 cells per well is a good starting point. Note that a 1-hour incubation at room temperature prior to culture at 37 °C may improve the uniformity of cell coverage on each scaffold. Media changes can be performed every 1-2 days but this is dependent on cell type and growth characteristics. Media changes should ideally be performed every ≥ 2 days to reduce any temperature variability that may be caused by repeated removal of the plate from the incubator.

As with conventional 2D culture in the 384 well format, plates either cultured in or removed from an incubator at 37 °C in tall stacks, will take longer to equilibrate to the surrounding temperature than plates arranged separately. In addition, it is well known that inefficient temperature equilibration can result in temperature gradient effects between wells in the centre and wells at the edges of a plate. Plate stacking may exacerbate such cross-plate temperature gradients as well as causing differential gradient patterns between plates within the same stack. This may affect assay performance and cell migration towards the edge of the wells when seeding. This is a generic feature that occurs in all standard micro-titre plates and is not due to the presence of Alvetex Scaffold.

Given that pipetting errors may also occur when manually removing the product from a 384 well plate it is recommended that the 384-well plate is used on an automated liquid handling platform due to the small volumes dispensed.

From these observations, the optimal growth conditions for PC-3 cells on the 384 well plate is recommended to be between 1,000 to 5,000 cells per well for up to four days 3D culture. 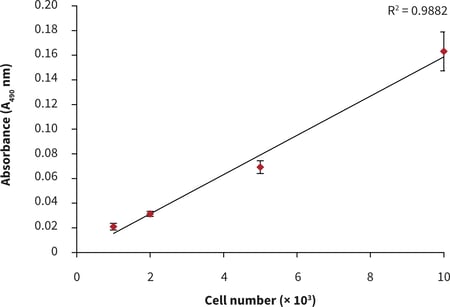 Figure 2. Cell number standard curve for the PC-3 cell line using the MTS cell viability assay. PC-3 cells were seeded at a range of densities onto Alvetex Scaffold 384 well plate format and cultured for 24 hours prior to analysis: linear increase in absorbance with increasing cell seeding density was observed for up to 10,000 cells per well. Data from multiple sample replicates are shown (n = 12, mean ± SD). 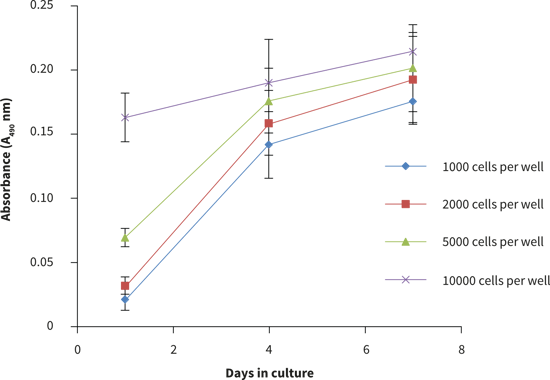 Figure 3. Cell number standard curves for the PC-3 cells using the MTS cell viability assay. PC-3 cells were seeded at a range of densities onto Alvetex Scaffold 384 well plate format and cultured for up to 7 days hours prior to analysis. Data represent mean ± SD, n = 12.