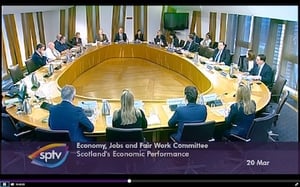 On Tuesday 20th March 2018 REPROCELL Europe Ltd’s CEO Dr David Bunton appeared in front of the Economy, Jobs and Fair Work Committee at the Scottish Parliament to discuss Scotland’s Economic performance.  He was also joined by:

Various companies with a presence in Scotland were selected to give evidence in parliament on a particular topic in front of the Committee.  The role of this Committee is to scrutinise the Scottish Government’s policies and expenditure in relation to numerous matters.

The remit for the inquiry that Dr Bunton was involved in discussing was:

“To examine Scotland's economic performance since 2007 and understand the reasons for recent trends and divergences in performance between Scotland and the UK as a whole, other regions/nations in the UK, and other countries in the EU. The inquiry will also identify challenges and opportunities facing the Scottish economy over the next ten years and understand what action is required to make Scotland's economy more inclusive, innovative and international.”
— http://www.parliament.scot/parliamentarybusiness/CurrentCommittees/106147.aspx

Notable points of the discussion

DH – Life sciences has performed very well over the past 10 years.  Huge number of SMEs have grown to a sizeable scale, David representing one such company [REPROCELL].  We have seen a lot of change in the industry that comes down to companies like David’s [Biopta having been acquired by REPROCELL].

DB – We have seen a difficult spell after the great recession, with a recovery in the last 2 or 3 years.  The sector REPROCELL is in, pharmaceutical services, has grown by 30% and much of that in the last 3 or 4 years.  Scotland has performed reasonably well in terms of investment.  There are a lot of positives but certainly areas to discuss where we can go further and opportunities to build on.

Q – Within your sectors, there are companies that have done better or worse in the past few years; what is it about these companies which influences how they have performed?

DB: Certain companies have done extremely well in Scotland and have led the way globally, for example, companies such as BioOutsource, Vitrology and BioReliance in the biopharmaceutical safety testing area.  Scotland has built up a global reputation, being known for its quality of work, the assurance customers have of compliance with regulations, a carefully delivered approach and good customer service.  These softer elements have really played a big part to the reputation of this [life science] sector.

Q – is it key for a successful company to have strong ties with universities?

DB – It is often key as a starting point.  The scale is achieved through strong commercial and business development skills.

Q- Would you say the balance in partnership is right between the government and the different sectors at this time?

DB – Scotland has really led the way with things like the Scottish Investment Bank, we have been ahead of the game in that way and it’s important we keep that up.  For early R&D funding we need to make sure we don’t fall behind after Brexit.  It is very important for that early investment.  The interaction between companies and the NHS are improving, for example through the Health Innovation Partnerships, but still not perfect.

Q – Do you think companies within your own sector are confident enough and supported enough to sell more goods both to the internal and international market.

DH – Yes.  The support from organisations such as Scottish Development International to attend meetings/conferences that are essentially partnering meetings, quite like speed dating.  SDI also often have space for companies to hot desk or meet with clients, which is very helpful.

The video of the full meeting can be found at: