Respiratory diseases are a global health burden [1], with 65 million people worldwide affected by chronic obstructive pulmonary disease (COPD) and a staggering 334 million people with asthma. Although some pathologies have a clear inherited component, like cystic fibrosis (CF), environmental exposure to pollutants and tobacco smoke are main drivers of symptoms and disease progression. Most lung pathologies can be traced to the airways, circulation, or overall tissue, with each mechanism requiring a dedicated set of disease modelling tools.

In this post, we will review some of the ex vivo models of respiratory disease available for pre-clinical drug discovery, including the use of patient tissue. We will also explore how disease-relevant pathways can be investigated using healthy human tissue, and what 3D models of respiratory mucosa have been developed.

Arterial contractility assays are a benchmark for drug safety, but also efficacy testing of pulmonary arterial hypertension (PAH) drug candidates. Wire myography apparatus allows rings of fresh pulmonary arteries, with endothelium intact, to be mounted in an environmental chamber with ultra-sensitive force transducers providing information on the contractile state of the tissue. Responses to disease-relevant molecules like bradykinin [2] can be monitored and used as reference against candidate drugs, while the addition of electrical field stimulation (EFS) allows to probe nerve-regulated pathways.

Bronchi, from first to fourth order, can also be mounted in wire myographs or in larger-sized organ baths to the same effect. Reference compounds that bronchi respond to in these set-ups include the dilators theophylline, vasoactive intestinal polypeptide (VIP) and beta-adrenergic agonists e.g. formoterol and salmeterol. Contractile agents can also be used, such as acetylcholine, carbachol, histamine, U46619 and atropine. For diseases where allergens or immunomodulators are known to exacerbate symptoms, tissue can be sensitized with cytokines prior to candidate drug exposure to provide a more realistic disease model. 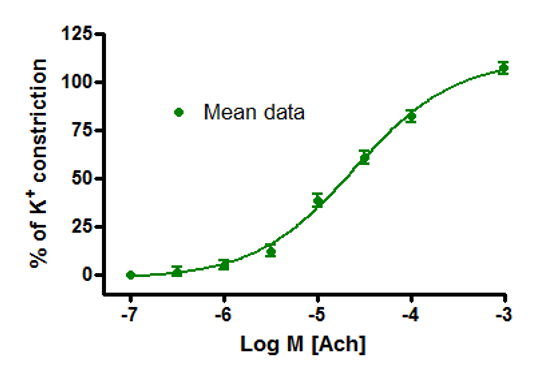 2. Infection and Immunity in explants and 3D models

Immune factors are involved in several respiratory diseases like COPD and CF, in addition to a range of viral and bacterial pulmonary infections. Because immune responses rely on interactions between multiple cell types, fresh parenchymal explants, or precision-cut lung slices (PCLS) are the preferred sample choice. Donor-to-donor variation can be significant in terms of immune response and make detecting drug effects difficult, hence pre-treatment with a pro-inflammatory agent, such as LPS, is routinely used to normalize replicates. Patient tissue supply does limit the amount of material available for processing after exposure, although advances in ELISA multiplexing and next-gen transcriptome sequencing means targeted cytokines and gene panels can produce a large amount of data from small sample volumes.

For fibrotic conditions, tissue access is more problematic, and the timescale of inducing a robust disease phenotype in healthy explants is incompatible with tissue viability ex vivo. For example, idiopathic pulmonary fibrosis (IPF) assays suffer from the added complication that its etiology is still elusive, and it is accepted that current animal models (bleomycin-induced) cannot replicate every aspect of the disease. Several 3D models [3], however, are in development.

3D models of respiratory infection are somewhat easier to come by. Scientists from GSK vaccines and Novartis [4] used porous Alvetex scaffold to generate an in vitro human bronchial equivalent model, by co-culturing lung fibroblasts with trachea-bronchial cells, separated by a thin collagen layer. The barrier integrity of this model allowed it to be used to investigate mechanisms of Non-Typeable Hemophilus influenza infection through the mucus, epithelium, and stroma. Bacterial aggregates and vesicles were also observed, as during infection progression in vivo. 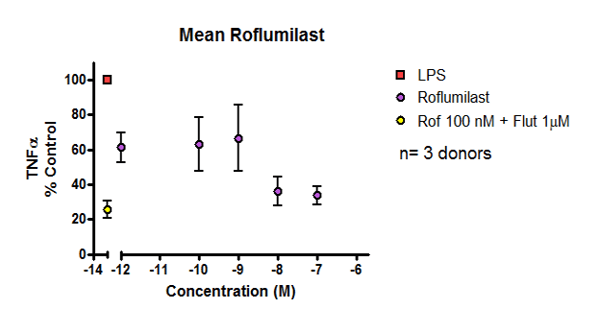 Cystic fibrosis (CF) is another rare disease [5] where access to patient tissue can impede ex vivo research. However, some endpoints like salt and water transport can still be investigated in healthy fresh tissue. Using an Ussing chamber set-up, tracheal mucosa can be exposed to either amiloride or isoprenaline to modulate ion channel function that control water transport, and act as reference compounds against which to test mucus-thinning candidate drugs.

Purified fractions of sputum collected from CF patients is a more readily accessible sample type compared to lung parenchyma. When diluted airway supernatant is incorporated into an Alvetex Scaffold 3D in vitro model of airway mucosa [6], polymorphonuclear neutrophils co-cultured with a monolayer of Club cells transmigrate towards the CF-conditioned medium and show patterns of CD62L, CD16 and CD63 expression consistent with in vivo conditions. 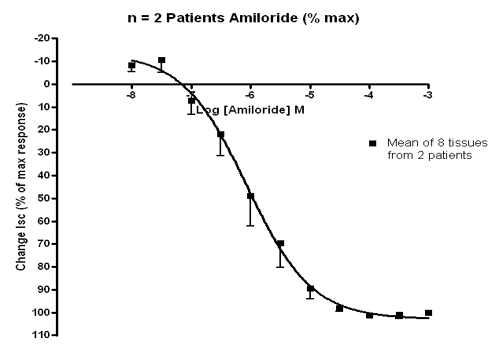 4. Towards Precision Medicine with AI and Next-Gen Sequencing

Ultimately, the future of medicine is precision medicine. Datasets with hundred histological images are searchable by deep learning algorithms [7] that assist pathologists grade tumor lesions, and targeted gene sequencing panels can quickly identify specific cancer subtypes. Efforts to upscale tumor profiling data are being undertaken, e.g. by the Dana-Farber Institute [8], whose profile project has genotyped thousands of patients. The data gathered from such large datasets can reveal potential targets for etiology or therapy and form the basis for future research programs, the results of which will eventually feedback into treatment options for donors who contributed their genetic material.

Smaller-scale precision medicine studies are of course also undertaken by research groups and biotechs with limited AI access. Sourcing human samples from repositories and prospective collections for target identification is relatively straightforward. Patient demographics and medical history information is usually included, and some patients will have provided samples in multiple forms, i.e. tissue blocks and DNA extracts. If not, extraction methods developed specifically for use from FFPE blocks or cryopreserved samples can help recover material for next-gen sequencing.

To test whether the efficacy of novel drug candidates correlates with patient sub-groups, fresh tissue is best. In collaboration with NHS Scotland, REPROCELL scientists [9] exposed fresh lung parenchyma obtained from 25 COPD patients after resection surgery to anti-TNFα standard-of-care drugs and correlated the levels of decreased TNFα secretion to the single nucleotide polymorphism (SNP) profile of each patient. Two SNPs, one in CYP2E1 and the other in SMAD3, were identified as significantly influencing drug response.

Multiple assays and technology platforms are available to investigate etiology and therapeutic candidates in respiratory diseases, so specific disease mechanisms must be considered to determine which techniques are best. Whenever possible, fresh patient tissue will generate the most physiologically and clinically relevant data but, when patient tissue supply is an issue, induced models from healthy human tissue or 3D models using primary human cells can still be informative. 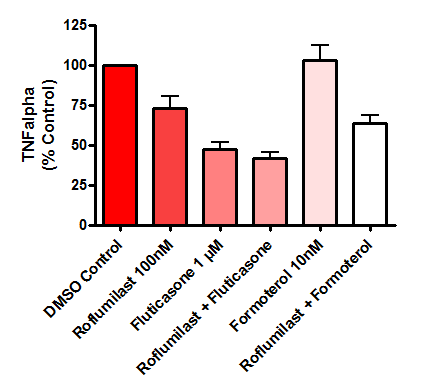 Figure 4: Bar graph showing the mean effect of drugs on cytokine (TNFα) release from human lung biopsies. Parenchymal tissue was derived from 25 COPD donors. Data is displayed as a percentage of the corresponding control group (DMSO) in both graphs. Error bars represent standard error of the mean (SEM).

Reasons to partner with REPROCELL, the one-stop shop for products and services across a range of Respiratory disease models: