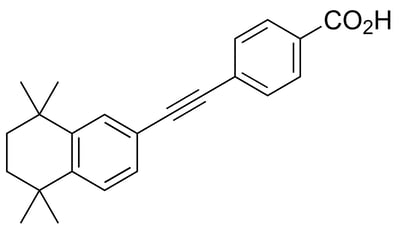 ec23 is a pan-RAR receptor agonist that is stable and maintains the same biological activity as ATRA (all trans retinoic acid). ATRA is well known for its ability to regulate cell differentiation. However, retinoids such as ATRA are excellent chromophores and efficiently absorb light and isomerise. This is not a desirable property for cell culture reagents where consistency and reliability of a molecule is important for robust, reproducible results.

REPROCELL routinely test the stability of the our synthetic compounds in line with their development as stable alternatives to known biological molecules. The structural stability of ec23 and ATRA were examined by NMR during prolonged exposure to light. ATRA shows significant isomerisation and degradation whereas ec23 remains completely intact.

Robust induction of neurogenesis by ec23

The synthetic retinoid, ec23 is a potent inducer of pluripotent stem cell differentiation. Human TERA2.cl.SP12 pluripotent stem cells exposed to either 10 uM ec23 or ATRA form populations of terminally differentiated neurons. Immunocytochemical staining for neurofilament-200 was performed on differentiated cultures and the number of positive cells quantified. Results show that ec23 is a more potent inducer of neurogenesis than ATRA. In direct comparison to ATRA, synthetic retinoid ec23 induces larger numbers of neural cells with less variability and with the added advantage of compound stability. 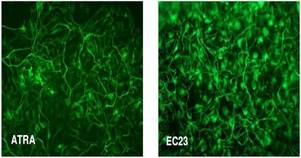 Purity: Greater than 99% by HPLC analysis

Storage and Stability: Store powder at ≤20 °C. Following reconstitution, store in aliquots at −20 °C. Stock solutions are stable for 6 months when stored as directed.